Guardians of the Galaxy Release Imminent

The premiere of Marvel / Disney’s Guardians of the Galaxy is imminent on Disney XD… and sneak peaks are already airing. A series of animated short peaks that preview the series have already started airing on Disney XD. There will be a full advance preview on September 5, with the full one-hour premiere following on September 26. 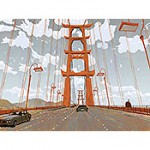 Walt Disney Animation has announced their first feature-length animated film based on a Marvel property Big Hero 6. Inspired by a little-known Japan-set Marvel series about a team of state-sanctioned superheroes, the film will center on a boy named Hiro Hamada and his beloved robot companion BayMax who join a team of crime fighters in a mythical mashup high-tech city called San Fransokyo.

Marvel Animation is teaming the big green guy with Tony Stark in an all new feature film. Iron Man & Hulk: Heroes United is a direct-to-video animated film that will team the two up to battle the energy creature Zzzax.